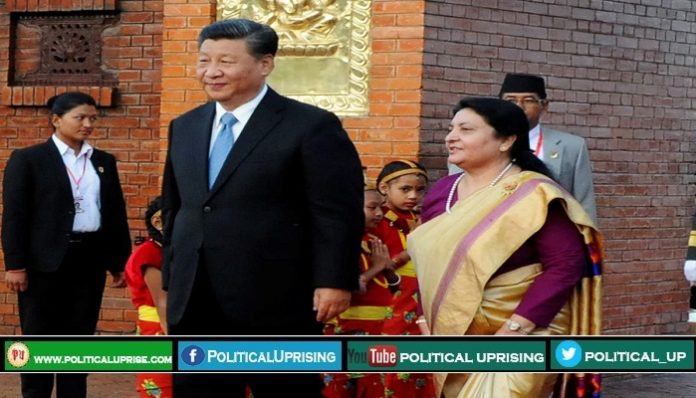 President Xi jinping has arrived Nepal with Multiple agenda.China and Nepal have signed 20 agreements,including one a trans-Himalayan railway.

President Xi Jinping has wrapped up a landmark visit to Nepal, the first by a Chinese president in 23 years, with 20 deals signed and nearly $500m in financial aid pledged amid Beijing’s growing influence in the impoverished Himalayan nation.

Along with a Chinese delegation Xi arrived in Kathmandu from Chennai on Saturday for the start of his two-day state visit after meeting Indian Prime Minister Narendra Modi. He departed for Beijing on Sunday.

After talks in the capital, Kathmandu on Sunday, Xi and Nepalese Prime Minister KP Sharma Oli witnessed the signing of 18 agreements and two letters of exchange in areas of connectivity, security, border management, trade, tourism and education.

“Our priority is to create opportunities for Nepal, joining it to China’s development. We are focusing on connectivity between the two countries,” he said.

In a signed article published in Nepali newspapers on Friday, Xi said he would use the two-day visit to “renew friendship and explore cooperation with my Nepali friends”.

“It is important that we adopt a strategic and long-term perspective and draw up a blueprint for our bilateral relationship to take it to a new height in this new era,” Xi added.
During delegation level talks with President Bidhya Devi Bhandari on Saturday, Xi announced 56bn rupees ($492m) in economic assistance for Nepal over the next two years, an official told the Kathmandu Post on condition of anonymity.

Separate deals for a trans-Himalayan railway link to Tibet and a tunnel were reached on Sunday.

The 70-km (42-mile) rail link will connect Gyiron in Tibet with Nepal’s capital city of Kathmandu, making it one of the most ambitious infrastructure projects in the country.
Landlocked Nepal, geographically sandwiched between India and China, is seeking closer ties and much-needed energy and infrastructure investment from Beijing.

Asian giants India and China have both sought to woo Nepal and have poured in aid and infrastructure investment.

In 2017, Nepal signed up to China’s Belt and Road initiative, a vast global infrastructure programme, which includes the building or upgrading of highways and airports in the country.

Although India has traditionally been Nepal’s main ally, China has intensified its presence, pumping millions of dollars into projects ranging from roads to hydropower plants.

Lok Raj Baral, a former Nepalese ambassador to India, said Nepal has to be “very cautious” and maintain a “good balance” between the two neighbours.

President Xi jinping has arrived Nepal with aims to up Nepal partnership with Belt and Road.