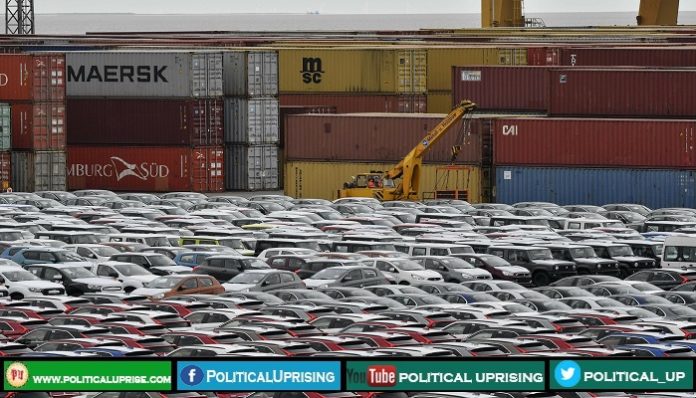 German economy has narrowly avoided a technical recession, after the latest figures showed the country’s economy grew by 0.1% in the third quarter.

Shoppers helped grow the German economy by 0.1 percent in the past three months.

Strong exports, state spending and consumers have helped the German economy avoid a recession by the narrowest of margins in the third quarter, detailed data showed on Friday, confirming a preliminary reading of a 0.1 percent expansion on the quarter.

Europe’s biggest economy is going through a soft patch as its export-oriented manufacturers cope with trade friction, a struggling car industry and uncertainties over Britain’s planned departure from the European Union.

Conservative Chancellor Angela Merkel‘s right-left coalition government has rejected calls from industry groups and economists for a stimulus package to put the economy firmly back on a growth trajectory.

In its tenth successive year of growth, the economy has been relying on strong consumption as exports weaken, which resulted in a second-quarter GDP contraction of 0.2 percent.

The traditional definition of a recession is two quarters six months of GDP contraction.

“Particularly the strength of private consumption remains an important anti-recession insurance for the economy,” Carsten Brzeski of ING wrote in a note. “Private consumption has been growing consecutively every quarter since the start of 2014.”

The data showed that private consumption grew 0.4 percent and state spending by 0.8 percent, which translated into each segment contributing 0.2 percentage points to growth.

Acting on the programme agreed between Merkel’s conservatives and their Social Democrat coalition partners, the government has increased allowances for families, students and pensioners.

This comes in addition to tax cuts and more spending on infrastructure.

Economists have been urging the government to ditch its policy of incurring no new net debt, saying it should instead borrow to finance a stimulus package.

The government seems to be betting on an easing of trade frictions between the United States and both China and the EU to revive Germany’s manufacturing sector.

The data on Friday showed that despite growth in exports, investment in fixed assets and equipment had contracted in the third quarter, a sign that companies still have a negative outlook.

“The fall in investment in equipment and the burden of inventory reductions show that companies have reacted strongly to the global uncertainties and the problems facing the automotive industry,” said Andreas Scheuerle of DekaBank.

In addition to trade conflicts and a slowing global economy, German carmakers are also burdened by a costly shift to electric vehicles and stricter emissions rules.

German Economy Minister Peter Altmaier said that while the numbers show the country avoided a technical recession in the third quarter, economic development in the region is still fragile.